Hawaiian’s historical relationship with the native forest birds is most notoriously demonstrated in the intricate art of Hawaiian feather work and the well-known cloaks, helmets, and leis worn by Hawaiian nobility. The tightly woven feathers of these adornments are arranged in bold patterns and have a velveteen appearance. A fine-meshed net made of olonā fibers (Touchardia latifolia), known as naepuni, is the foundation for most Hawaiian feather work. Constructed in the same fashion as fish nets, certain naepuni could take up to a year to complete. It was during this time that the early Hawaiian bird catchers, kia manu, went about collecting the necessary feathers.

The kia manu used natural sticky latexes, either from ‘ulu trees (Artocarpus altilis) or the outer layer of Pāpala kēpau seeds (Pisonia brunoniana), to capture forest birds. The latex was applied to ‘ōlapa branches (Cheirodendron trigynum) that were placed throughout the forest. If a bird, such as an ‘I‘iwi, perched on the branch, it stuck to the latex and the kia manu could collect them. After enough feathers were collected and sorted by size, shape, and color, they were strung in bundles that were then tightly woven in overlapping rows on the naepuni.

Hawaiian ali‘i wore the time-consuming feather cloaks into battle or on special occasions. At first only high ranked men wore the feathered cloak, but after death of Kamehameha the Great, his daughter Nāhiʻenaʻena and other women of rank decided to obtain their own feather works to wear at peaceful occasions.

How the ‘I‘iwi bird got its color

The demi-god, Maui, was looked upon in some stories as the “Hercules of Polynesia.” Spoken of in stories throughout Polynesia, Maui pulled up the islands from beyond the oceans depth and in Hawaiian mythology had many exploits including snaring the sun. But the one story that is not so common among Maui mythologies is the story of how Maui gave the birds of Hawai‘i their colorful feathers.

Some kupuna speak of times long ago, where the birds would fly around the houses of ancient people. The leaves and branches of the trees and shrubs would move in the motion of the bird’s wings and their fluttering could be heard from great distances. The birds would sing sweet melodies from their perches, and although they could hear them, the people could not see the birds. Only one man could see them, and that man was Maui.

Maui was a demi-god who was born with clear vision. Maui could see the swift wings, as the birds flew back and forth, from branch to branch. He saw colors of red and gold and he enjoyed listening to their unique songs. It has been said by some that the vast colors of these remarkable songsters were individually painted by Maui. The ‘I‘iwi in particular was very made to be very bright and had a call that resonated throughout the forest.

One day, another god, residing upon a different island, came to visit Maui. Each god boasted about the merit and beauties of each their islands. During the joyous conversation, Maui decided to call upon his friends, the birds. The birds quickly flew in at Maui’s request and their sweet voices filled the still air. When the visitor remarked about the mysterious harmonies, Maui decided to lift the veil that concealed the beautiful birds. For the first time, the ancient people saw the remarkable red birds, the ‘I‘iwi and ‘Apapane (Himatione sanguinea), and the gorgeous yellow feathers that belonged to the ʻōʻō (Moho nobilis) and the Mamo (Drepanis pacifica). They were delighted to find the birds were joyous to both their eyes and ears.

The ‘Apapane (Himatione sanguinea) is one of the more common endemic honeycreepers on the Hawaiian Islands. Listen for their delicate tunes as you hike Hawai‘i’s mountainous regions and look for their small scarlet flocks flying to and from blooming ‘ōhia lehua trees (Metrosideros polymorpha). The ancient Hawaiians sometimes chanted about the ‘Apapane bird and other honeycreepers. In the Kumulipo, the Hawaiian creation chant, the ‘Apapane was one of the many honeycreeper birds that were created during the “dawn-of-time,” and this made it a kinolau (body spirit) for many Hawaiian deities. Ancient Hawaiians told many stories of subordinate deities, immaculate gods and even relatives taking the forms of birds like the ‘Apapane.

The ‘Apapane is also known within Hawaiian culture for its scarlet feathers. Much like those of the ‘I‘iwi bird, ‘Apapane feathers were incorporated into various feather work crafts to adorn Hawaiian ali‘i. To learn more about Hawaiian feather work, see our ‘I‘iwi in Hawaiian Culture article.

In this famous Hawaiian love story, Hawaiian honeycreepers are guardians of the Paliuli chiefess, La‘ieikawai. The ‘Apapane is one of the honeycreepers that does her bidding.

In the romantic story of La‘ieikawai, as told by S.N. Hale‘ole, La‘ieikawai is a beautiful chiefess who is served upon and resides on the wings of supernatural Hawaiian honeycreepers. La‘ieikawai’s house is thatched with the royal yellow feathers of the ōʻō bird and she is attended to by i‘iwipolena. While living amongst the honeycreepers, she catches the eye of a handsome Kauai chief, Kauakahialii. He sends a servant to invite her to his dwelling and La‘ieikawai responds, “When rings the note of the ōʻō bird, I am not in that sound, or the ʻalalā (Hawaiian crow), I am not in that sound; when rings the note of the ‘elepaio then am I making ready to descend; when the note of the ‘apapane sounds, then I am without the door of my house; if you hear the note of the i‘iwipolena, then I am without your ward’s house; seek me, you two, and find me without. That is your wards chance to meet me.” La‘ieikawai’s suitor listens to the birdcalls for announcement of the beauty’s arrival. The first night she does not come but on the second night, after the ‘apapane’s song rings at dawn, La‘ieikawai appears at Kauakahialii’s door, resting on the wings of her birds.

The Kiwikiu received its unique name for its abruptly curved beak, its whistle, and the weather on the mountain where it lives. However, the Kiwikiu wasn’t always known by this name, the original was either lost or never known to the ancient Hawaiians. In the year 2010, the Hawaiian Lexicon Committee gave the Kiwikiu it’s new Hawaiian name and it was inaugurated with a heartfelt chant under the direction of Kumu Sam Ohu Gon III. Today, Hawaiian culture celebrates the uniqueness of this lively green bird.

From the lofty summit of Hāna Mountain

However, it is obscured by the strata of clouds

The upper windward flank of countless birds is hidden

The echo of many bird voices, comes up from below

And the Ko‘olau district is brimming with birds

But harken now to this that strikes the ear

The clear call is carried by the kiu mountain wind

The call of the understory shrubs it is heard,

By the birds of the wet forest so

By the ‘I‘iwi that is dampened by the rain

By the ʻĀkohekohe grumbling in the forest

By the yellow Nukupu’u with its curved bill

You’re such and outstanding bird and blessed with beauty

Approach and occupy your perch

Here is a thriving bird

And may you thrive indeed 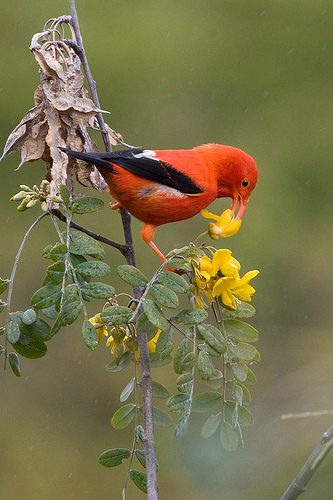 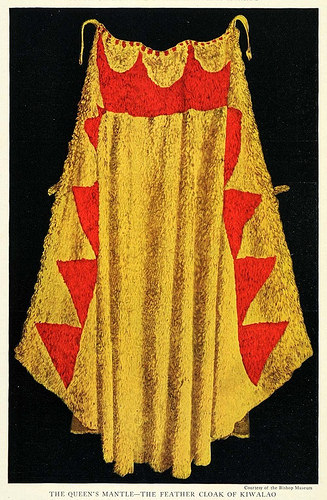 The cousin of Kamehameha the Great, Kiwalaʻō, was slain in battle wearing this cloak. A majority of the cloak consists of yellow feathers from the Mamo; the triangles of red from the I‘iwi. © photo: Bishop Museum 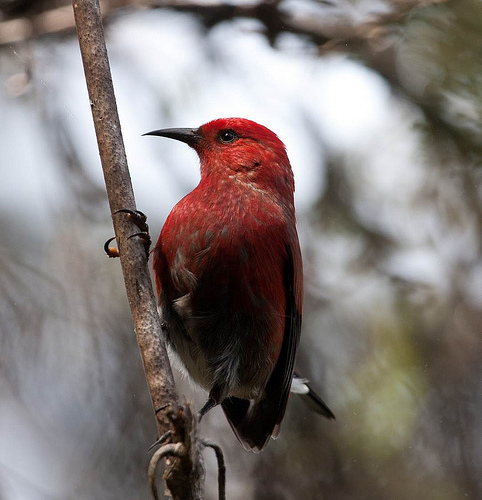 A flash of red in the forest can be one of these ‘Apapane. 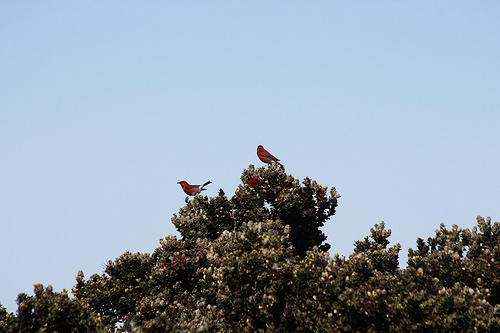 ʻApapane in an ʻŌhiʻa Lehua tree 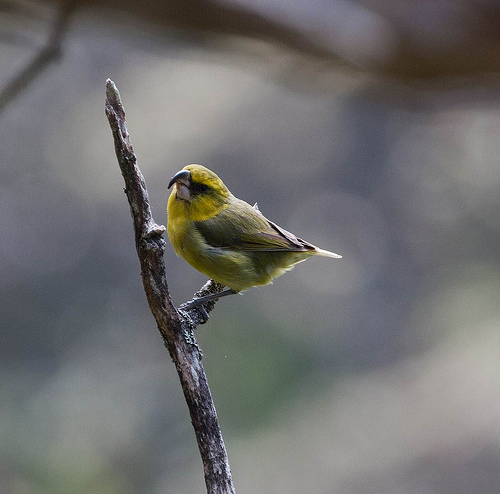 Parrotbill will use their bill to find insects in branches. 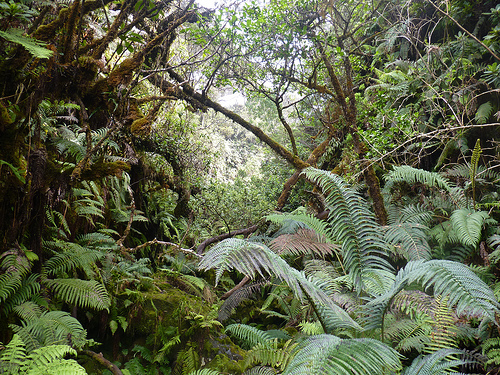 The forest of the windward side of Haleakalā. 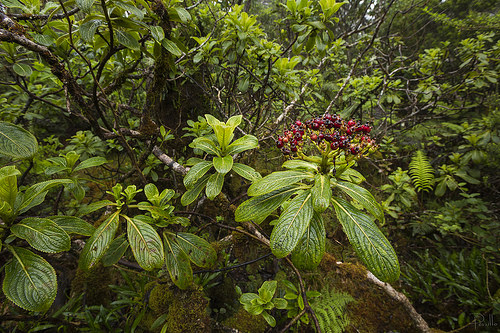