The ‘Ākohekohe (Palmeria dolei) is a critically endangered species that is restricted to less than 5% of its historical range. The primary threat to this species is avian malaria spread by introduced mosquitoes that can only persist in low and mid elevation (warmer) areas. Thus, ‘Ākohekohe and other forest birds are restricted to high elevations where mosquitoes are absent. However, existing native forest at lower elevations may attract birds into areas where they may be exposed to disease. This can be described by the “ecological trap” theory wherein a habitat appears to be good for one reason (e.g. food) but is in fact poor for another reason (e.g. disease). This may be particularly true for juvenile birds without established home ranges.

In 2013 graduate student Alex Wang of the University of Hawai‘i – Hilo began a research project in conjunction with MFBRP to investigate the dispersal distance and direction (elevation) of juvenile ‘Ākohekohe. Movement patterns of ‘Ākohekohe were largely unknown and if juvenile birds are moving into disease-risk habitat then the juvenile life stage may prove to be a limiting factor for the species. As nectarivores ‘Ākohekohe are highly dependent on constant sources of nectar. In native Hawaiian wet forests, the most common source of nectar for birds is the ʻōhiʻa tree. These trees bloom seasonally and an elevational gradient in the timing of the blooms has been recorded. In many places the highest densities of ʻōhiʻa blooms are found at high elevations in the cooler months and low elevations in the warmer months, at precisely the time when mosquitoes may also be able to reach higher elevations.

Alex and his crew used radio-telemetry to determine seasonal adult and juvenile movement patterns. A concurrent assessment of habitat quality via bloom intensity was conducted to test the hypothesis that ‘Ākohekohe are subject to an “ecological trap” resulting from high ʻōhiʻa bloom in disease-risk low elevations. To document ‘Ākohekohe movements and take foraging observations of both adults and juveniles, the team followed individual birds over the course of several weeks using radio telemetry. Radio telemetry uses a small transmitter to emit radio waves, which are then picked up by a receiver through an antenna. ‘Ākohekohe were captured, color-banded, and a transmitter was placed on the bird like a small, temporary backpack. Each transmitter has its own frequency, like a radio station, and emits a beep to the receiver. To track the bird, the researcher used the antenna and the receiver, which was dialed in to a specific individual’s frequency. The researcher could then get close enough to each bird to read their color-bands and confirm their identity. In this way Alex and his team were able to record hourly and daily movements, monitoring its foraging and breeding habits as well.

A total of 29 ‘Ākohekohe adults and juveniles were followed over two breeding seasons. Alex found that juveniles roamed over much larger areas than adults. The adults tended to stay in the same general area throughout the period, i.e. their “home range”. In contrast juvenile movement patterns were punctuated by long-distance flights followed by periods of stasis in a given area. These long-distance movements led a few individuals to briefly dip below the “mosquito line”, the theoretical elevational line above which mosquitoes cannot persist. Although the individuals that ventured lowest eventually returned to higher elevations, the propensity for juveniles to move such great distances, including downhill, strongly suggests that this age-class are likely at greatest risk for disease exposure. ʻŌhiʻa bloom density at higher elevations declined into the warmer months but did not increase during the spring and summer at lower elevations. However, a reduction in nectar sources at high elevations could theoretically lead to increased movement distance in search of food source.

Planning for this study started in 2011 and the pilot season began in 2013; research came to an end summer 2014. This research project was led by University of Hawai’i-Hilo graduate student Alex Wang and his adviser, Pat Hart.

Here is a presentation about this research:

If you are interested in becoming an MFBRP graduate student, please visit here. 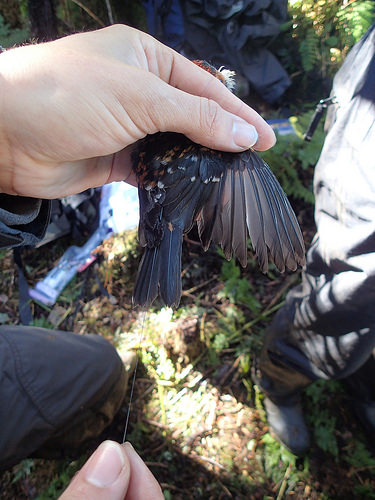 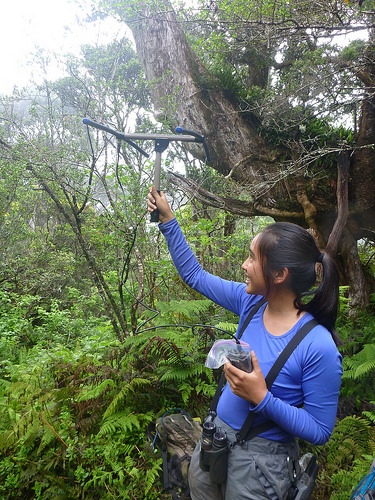 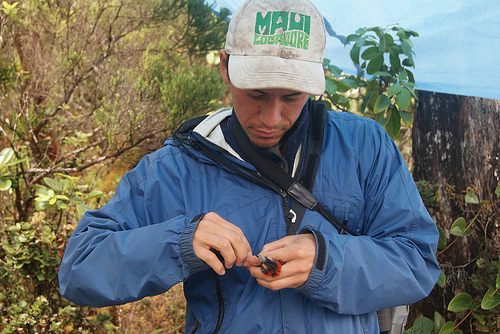