Hawai‘i is home to one of the most unique and spectacular native bird faunas in the world, but tragically also one the most threatened. Of the 54 historically-known endemic passerines, only 24 are known to be currently extant, of which 14 are listed as endangered by the State and Federal government. An additional ten species that are listed are not currently known from existing populations and have likely gone extinct in the last 30 years. Many forest bird populations are restricted to limited ranges and continue to slowly disappear from even these restricted areas. A few, however, appear to be developing tolerance to avian diseases and have spread into lowland areas. All populations of native forest birds are being adversely affected by avian disease, predation, habitat modification from feral ungulates and invasive weeds, and competition with alien species. Climate change is expected to worsen these conditions as increasing temperatures and drought allow the movement of mosquitoes carrying avian malaria into high-elevation refugia. Management programs are needed to halt the decline in these populations and restore them to safe levels. Basic information on forest bird population status, distribution and trend; and condition of habitats is needed to guide management actions and to provide insight on limiting factors and their control. Once management has begun, data on population trends is essential to evaluate effectiveness of management actions.

Statewide forest bird surveys were begun in the 1970’s by the U.S. Fish and Wildlife Service (USFWS) to obtain baseline information on population status and distribution for all native and introduced forest birds in the state. The Hawai’i Department of Land and Natural Resources (DLNR) participated in those surveys and surveys were completed for Hawai’i, Maui, Moloka’i, Lana’i and Kaua’i. Multi-agency statewide forest bird surveys were resumed in 1988 with DLNR in the lead as coordinator. These surveys target areas known to harbor endangered or range-restricted populations. The surveys are needed to evaluate statewide trends in native forest bird species status and distribution, and identify uniform trends, problems and changes in avian community composition.

In addition to general surveys for all forest birds, many endangered forest birds have declined to such critically low numbers that intensive searches are needed to monitor their status and to locate remnant populations to enable initiation of recovery actions.

Forest bird surveys are conducted on each of the main islands on a 5-year rotation basis. The order of the 5-year cycle will include East Hawai’i (Ka’ū), West Hawai’i, East Maui, Moloka’i and West Maui, and Kaua’i, in each respective year. Additional sites on these islands and on O’ahu will be surveyed as funds allow. Surveys are conducted in key native forest bird habitat. Surveys use the same transect lines established during the statewide surveys in 1988, as well as additional transects needed to fill in range gaps. A Variable Circular Plot (VCP) point count census technique is used to survey for status, distribution, and abundance of native and introduced forest birds. Data collected include date, time and weather condition; species and number, type of observation and distance from observer; and plant phenology as appropriate. Additional field surveys and observations may be done to collect information on species activity and behavior and reproductive condition. A VCP data analysis computer program is used to summarize data and calculate population statistics and density estimates.

Rare bird searches will be conducted using existing trails and transects or newly established transects. A combination of general searches, tape call-back, and station counts will be used to locate and determine status and distribution of rare birds. New technologies such as drones or automatic sound recorders (songmeters) may also be used if deemed appropriate.

Cooperators in this project include the U.S. Geological Survey Biological Resources Division, USFWS, National Park Service, The Nature Conservancy of Hawai’i and private partners. The Division project leader is the Nongame Staff Biologist in the Honolulu, Administrative Office.

Information generated through this study will be utilized by DLNR and other conservation-oriented agencies in monitoring status, distribution and population characteristics of forest birds to develop programs for the preservation, enhancement, and recovery of threatened or endangered birds and their habitats including updating and revising tasks and priorities in recovery plans.

Data on population size, characteristics, distribution and trend and the status and condition of habitat will be used to assess biological and ecological requirements and limiting factors and identify key habitat areas where ecosystem management actions will be most effective.

Surveys conducted in wildlife sanctuaries, Natural Area Reserves, forest reserves, and selected private land where active habitat management programs are being implemented will provide information on population trends and be used to evaluate the effectiveness of management actions. Management actions will be expanded or modified depending on the response in bird populations.

Survey information will also provide a data base with which to make assessments and recommendations on potential impacts of proposed land use actions and development projects in areas inhabited by forest birds.

East Maui was last surveyed in the spring of 2017. Read a full report here. Also check out our Spring 2017 Newsletter. 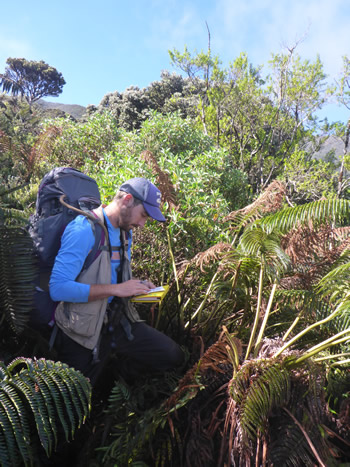 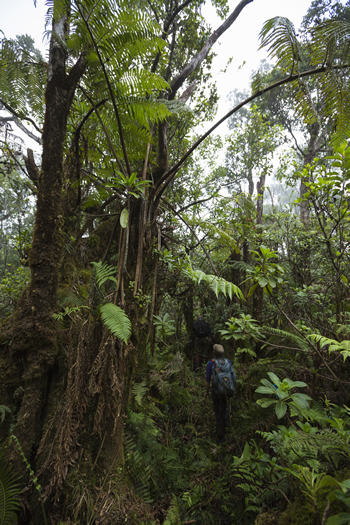