The available habitat for the critically endangered Kiwikiu and several other native forest birds on Maui is largely restricted to native forest above 4,500 ft. due to invasive plant species, mosquitoes, and avian disease. Although Kiwikiu is now only found on the windward (northeast) slopes of Haleakalā, fossil evidence suggests the species existed throughout the island and may have even preferred koa-dominated forests including those found on the leeward (southeast) slopes of Haleakalā. The leeward native forests today are significantly reduced, and the habitat has been denuded through over-grazing and introduction of non-native species. The combination of non-native ungulate grazing and the expansion of non-native grasses prevent natural regeneration of this forest. The resulting current conditions are of aging trees within a savanna-like habitat structure with little new growth or understory. As a result, there is significant interest in restoring this forest to serve as a functional watershed as well as provide habitat for threatened flora and fauna.

The Nakula Natural Area Reserve (NAR) was created in 2011 by the State of Hawai’i-Department of Land and Natural Resources- Natural Area Reserve System (NARS). This 614-ha area is within the Kahikinui division of the mountain, and fenced areas have been and are still being completed to fence out all ungulates.

In 2012, an approximate 170-ha section of the Nakula NAR was fenced and all ungulates were removed. Shortly thereafter, MFBRP, in collaboration with the State of Hawai’i-Division of Forestry and Wildife (DOFAW), NARS/Native Ecosystem Protection & Management (NEPM), and the American Bird Conservancy, began experimental restoration trials within the fenced area to identify the most efficient and effective method(s) of restoring the forest in Nakula NAR.

The field trials showed that outplanting seedlings was necessary to restore the habitat and promote a diverse and functional forest throughout the site; neither seed scatter nor unaided natural regeneration were as effective techniques. Most species had high (>90%) 18 month survival rates, with the notable exception of ‘ākala and māmaki (Mounce et al. 2015). These trials also indicated that natural regeneration of certain species could be enhanced through removal of the non-native grass mat. The MFBRP and NEPM have built upon these results and are restoring habitat to support Kiwikiu and increase the native forest within the reserve. The current outplanting strategy is focused on corridors connecting the remaining forest in the gulches (Figure 6), and along the erosion scars to prevent further soil loss.

Natural regeneration can be effective if the non-native grass is sprayed with herbicide, then removed to expose the topsoil. This treatment effectively promotes natural regeneration, although the remnant seed bank seems to be depauperate, with koa and ‘a‘ali‘i being the two most common species. This treatment can be effective as the initial step at landscape restoration, if the effort is followed with outplanting of understory plants.

As MFBRP continues restoring the native forest in the 170-ha section of Nakula NAR, work typically consists of seed collection, planting native seedlings, monitoring plants for growth and survival, and managing invasive species. Volunteers are usually needed for these remote field trips. In the future, MFBRP hopes to reintroduce the Kiwikiu to this area.

There is additional forest protection and natural regeneration occurring in the larger leeward Haleakalā region. NEPM is actively restoring other parts of Nakula NAR, and Leeward Haleakalā Watershed Restoration Partnership (LHWRP) is restoring ranchland and will soon begin outplanting efforts in Department of Hawaiian Homelands (DHHL). These external restoration efforts are crucial because Kiwikiu are unlikely to remain within the unit borders. Having a larger restored area with a range of forest types and ages increases the likelihood of the translocated birds remaining in the area. Given the high likelihood that Kiwikiu will use habitat in areas of the adjacent DHHL and Haleakalā Ranch properties, communications are being facilitated by LHWRP and access will be resolved before the Kiwikiu reintroduction begins.

As part of the habitat assessment, aerial imagery is being used to track the forest recovery and the effects of the forest restoration on the overall canopy cover. This will allow the project to control for the original, remnant forest and track the canopy cover that has been produced through the outplanting efforts. At the start of the restoration effort in 2011, canopy cover in the Wailaulau Unit of Nakula NAR was roughly 16.5% of the area. As of 2018, > 40 ha have been planted in the Wailaulau Unit, and if all these trees survive and mature, there could be up to 40% canopy cover within the unit not including the natural regeneration. While some of the remaining 170 ha cannot support native forest (e.g., exposed rock or cliff faces, ~ 58 ha), there are still approximately 44 ha of grasslands that could be restored. Many areas contain canopy trees but the understory no longer remains. In these areas outplanting of subcanopy and understory species will likely be needed to restore full ecological function. 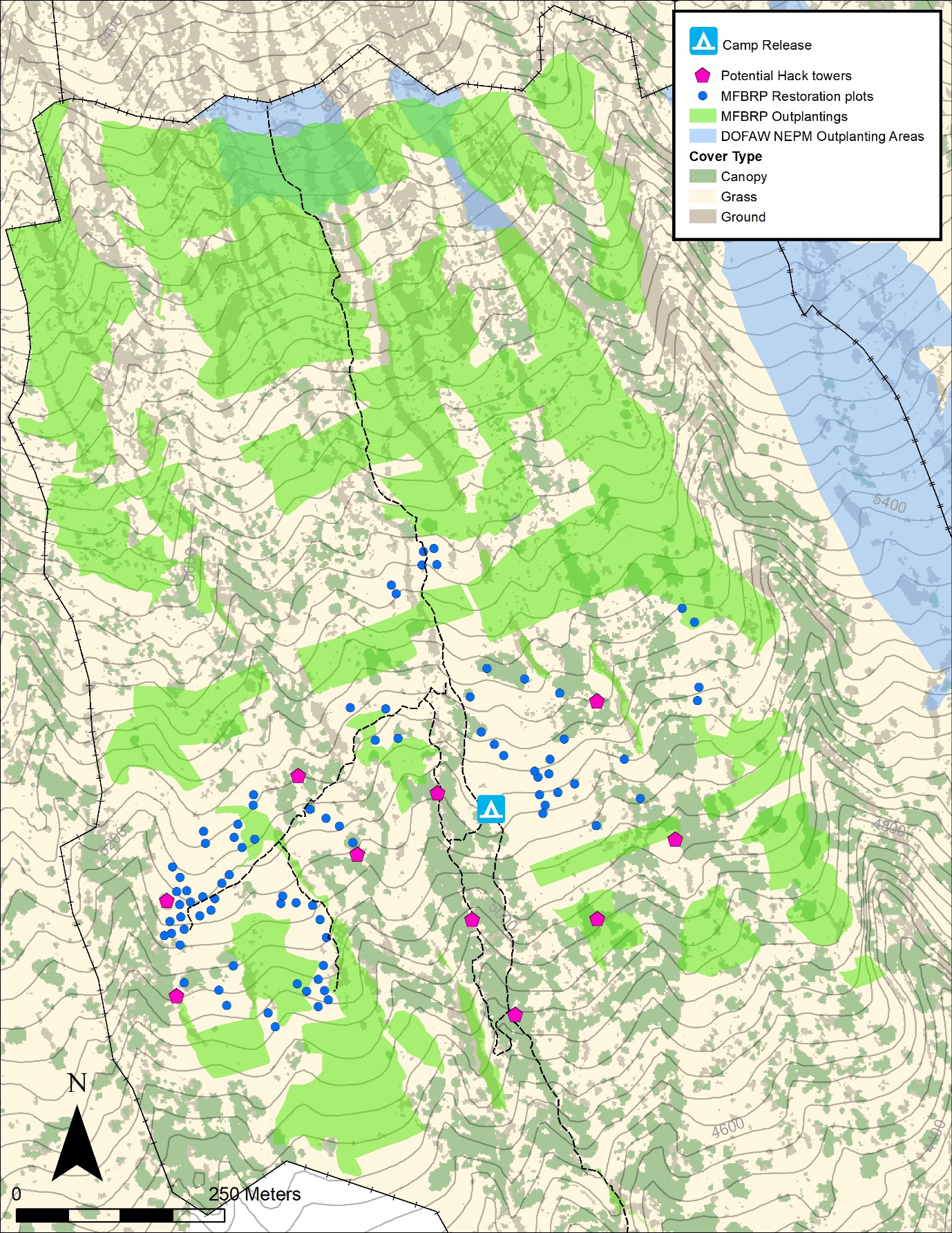 Eventually much of the leeward area will need to be restored to make up for the loss of habitat that may occur due to climate change (warm weather allowing mosquitoes and avian malaria to persist at higher elevations). Leeward Haleakalā Watershed Restoration Partnership, the State of Hawai’i, Haleakalā National Park, and many others (see Partners) are all working together to restore this land for our watershed and our native species. Kiwikiu and other native bird species will also eventually be reintroduced to this side of the mountain (see Kiwikiu Recovery). 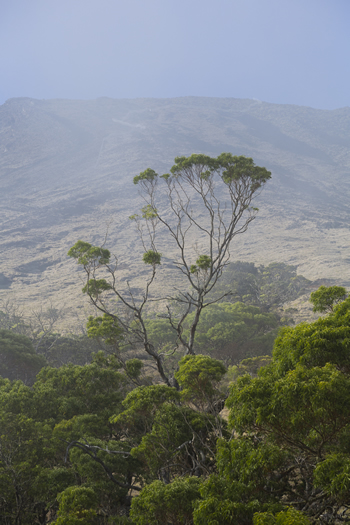 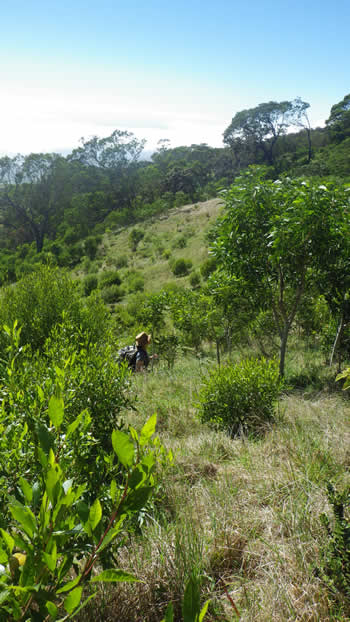 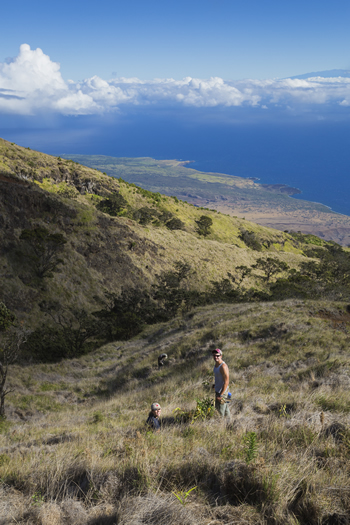 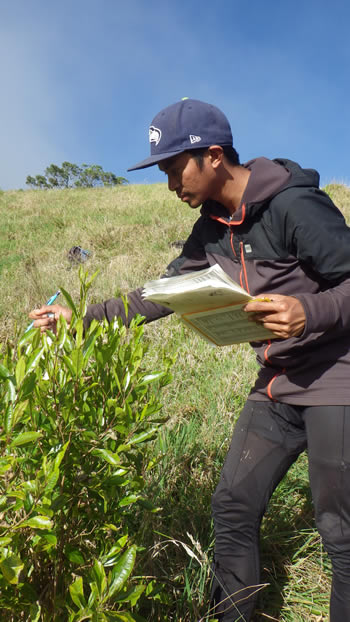